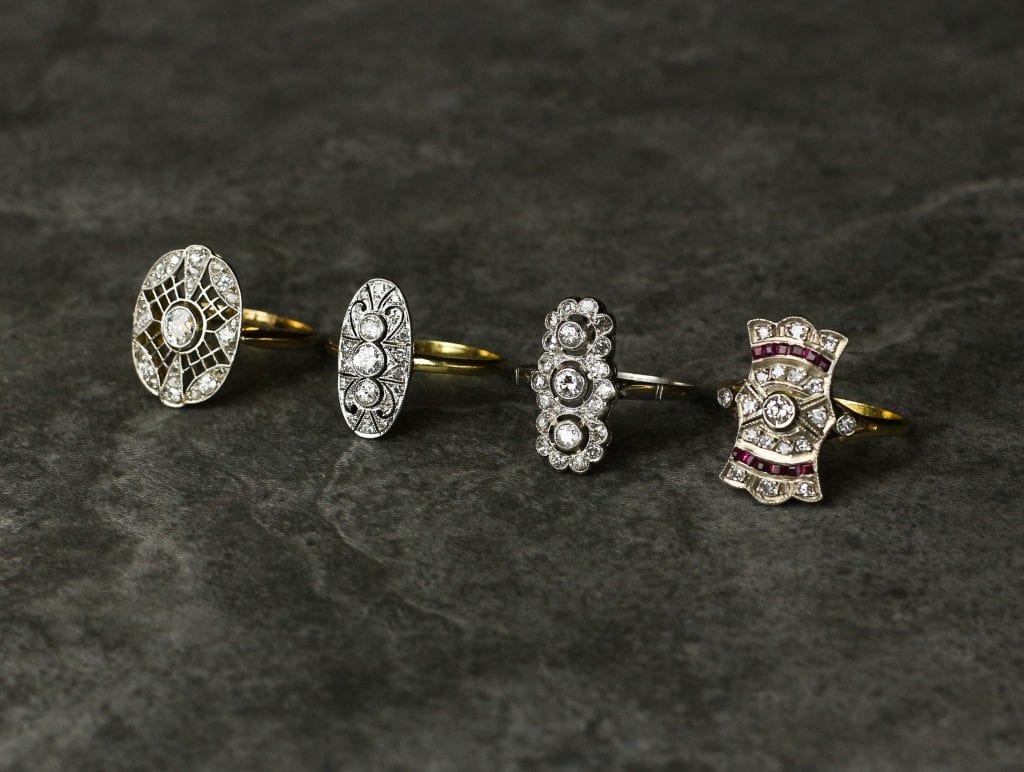 Art Deco Jewellery: An Age of Decadence and Excess

September 17, 2018Bruno
After four years of suffering during WW1 between 1915 and 1919, people realised how short life could be and a new motto emerged ‘Live and forget the past’. Traditions, values and fashions of the pre-war society and Victorian era were rejected and transformed. The period that followed became known as the Art Deco period (1920-1935), taking its name from the Exposition des Arts Deco-ratifs held in Paris in 1925. During this period, freedom of expression was encouraged and the years were characterised by decadence and excess. Art Deco style drew inspiration from the Far East, the Middle East and South American civilizations. It was influenced heavily by ideas from Futurism and Cubism, as well as Aztec and Russian Art. One piece in particular during the Art Deco period brought sweeping changes to the fashion and jewellery industry. The discovery of the tomb of Tutankhamun in Egypt in 1922 swept the world with “Egyptomania” with pyramids, sphinxes, scarabs and hieroglyphs all becoming common motifs in jewellery. Furthermore, the primary colour of Jaipur enamel jewellery inspired many creations in the late 1920s featuring diamond, emerald and ruby. 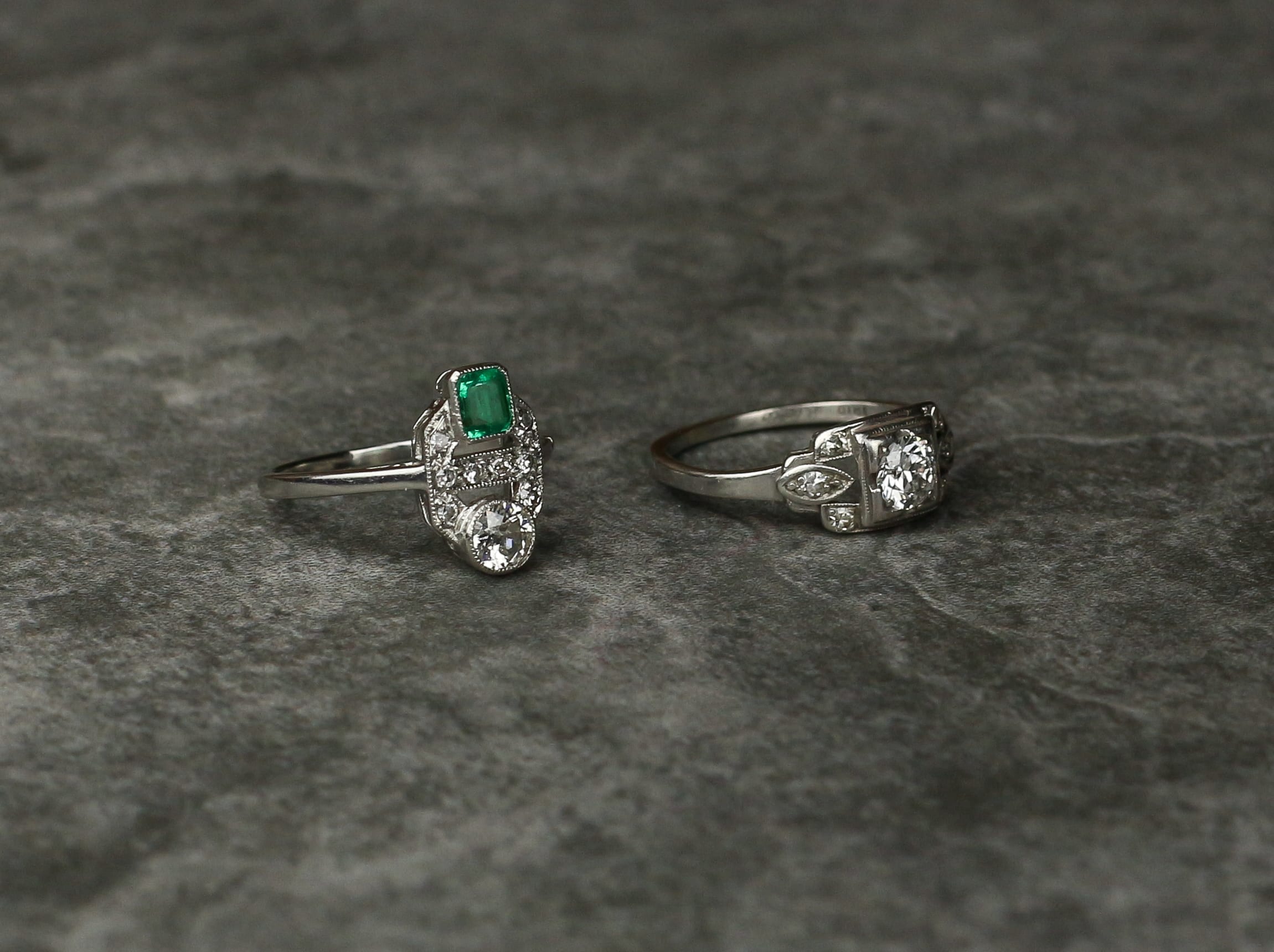 The influence from exotic and distant civilizations, combined with the forward-thinking mentality, dramatically changed jewellery design and production, inspiring changes in all the major jewellery houses and even the more conservative of jewellers. Both famous jewellery houses and artist jewellers began to reject mass-produced pieces in favour of unique, creative pieces expressly designed for a particular woman and to fit her tastes and lifestyle. In addition, the jewellery reflected the modern era in an age of cocktail parties, jazz clubs and wild young things. It is this combination that makes the design of Art Deco jewellery some of the most intriguing and important the world has seen. 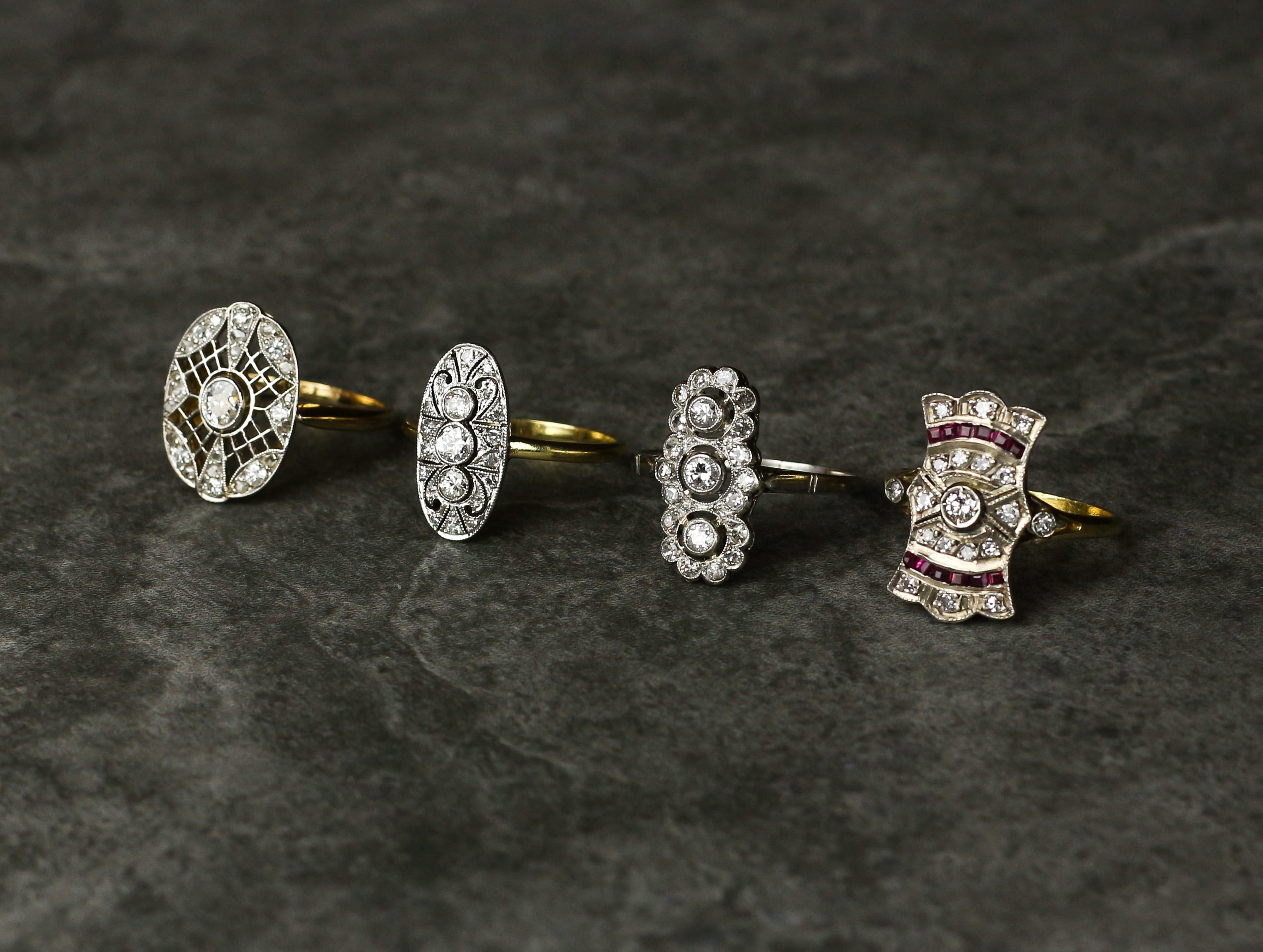 Much of the jewellery produced in the Art Deco period was made in black and white – the black often coming from the use of the gemstone onyx or black enamel and the white from diamonds. There was, however, also a lot of colour in Art Deco jewellery with sapphires, emeralds or rubies often used as a perfect accent to the diamonds in platinum setting. Another feature of Art Deco jewellery was the geometric designs and clear lines. This was made possible by improvements in diamond cutting technology enabling jewellers to utilise various geometric cuts. 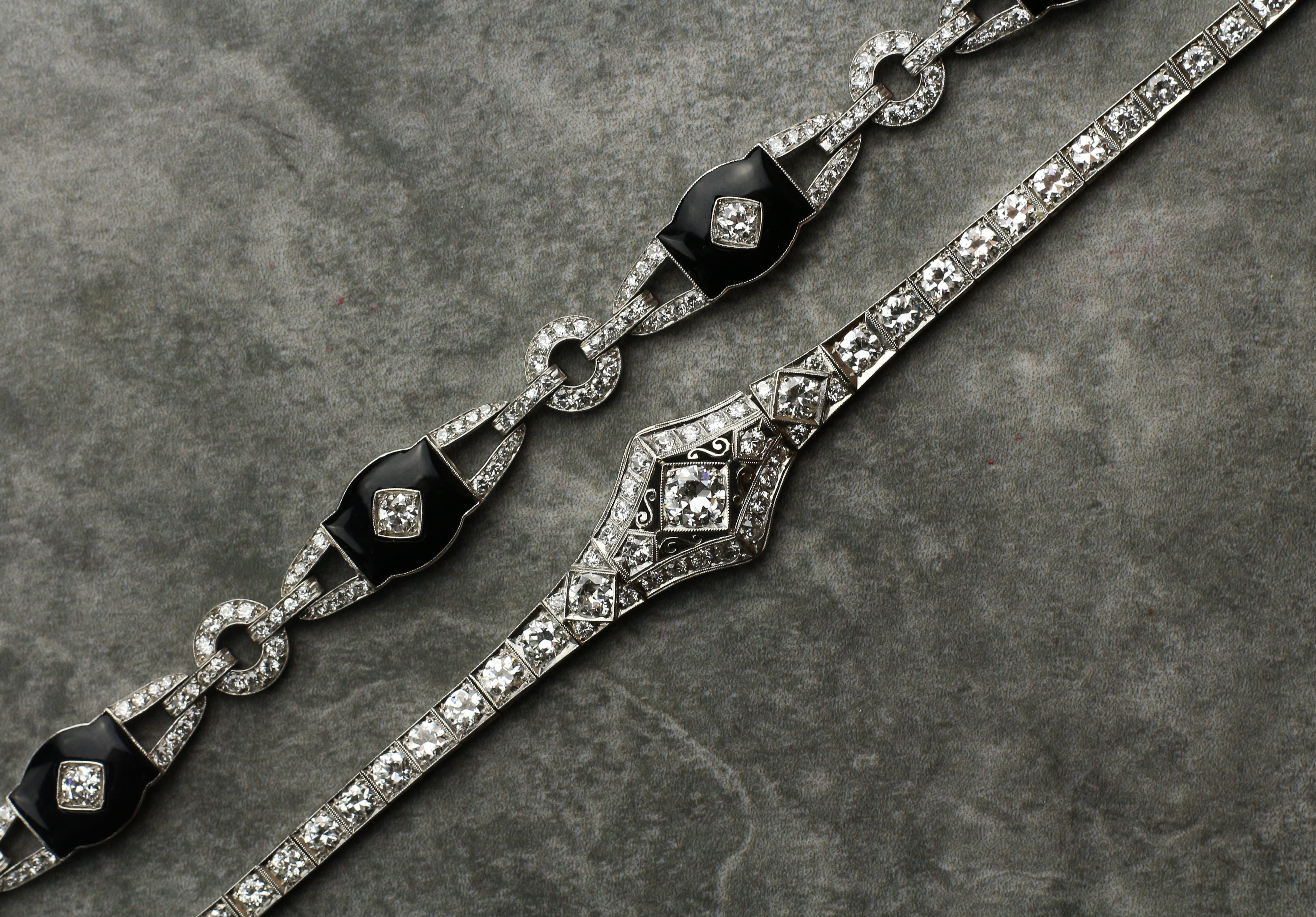 All these changes lead to the creation of rings different from any seen before. What made these rings look different was their imposing size, the daring contrasts of colour and the mixture of modern cuts for the stones which were mounted in geometrical designs – triangles, hexagons, trapezoids – with motifs from the East, quite independent of the European tradition. Gem-set bracelets and evening wrist-watches were also transformed throughout the Art Deco period. They were made mainly in platinum or white gold, pavé set with diamonds and embellished with calibre-cut onyx and occasionally coloured gemstones.

Original Art Deco jewellery is highly sought after today and modern day jewellers still draw much inspiration from the style and design. At The Vintage Jeweller we have an interesting selection of original pieces and are constantly on the look up for more, updating the website with new products on a weekly basis.